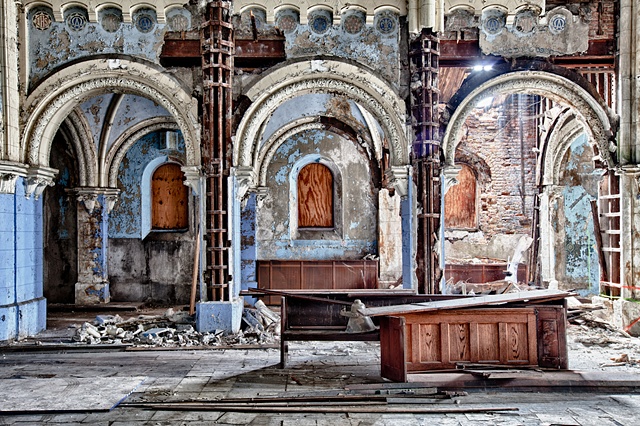 Saint Boniface Church was established for German immigrants in 1865. With roots in Chicago history that predate the great Chicago Fire of 1871, Saint Boniface played an integral role in helping to reshape and rebuild its neighborhood and city by providing makeshift housing within the church buildings as well as clothing and meals for people whose homes had been destroyed in the conflagration. Rising majestically from its corner location, Saint Boniface stands guard over Eckhart Park as it has for almost 100 years. It was constructed in 1902-04 and designed by architect Henry J. Schlacks. Rendered in a solid Romanesque style, the church and its adjacent school building dominate the block on which they sit.

Closed by the Archdiocese of Chicago in 1990, the historic Saint Boniface church has sat vacant and deteriorating since. In 1999 neighborhood citizens discover plans by the archdiocese to demolish the structure. “Stop the demolition” vigils were held by community activists, which resulted in a hold on all demolition permits. In 2002 rather than expend efforts to restore, the archdiocese expresses the churches intentions to sell Saint Boniface. In 2005 the Coptic Orthodox Church expressed an interest in purchasing and renovating Saint Boniface. The congregation made several attempt to communicate their interest in purchasing Saint Boniface, but finally in December 2008 their proposal was ultimately rejected by the Archdiocese of Chicago. Later that month the Archdiocese put a demolition request into the city, which was granted. In March of 2009 the city suspended demolition of Boniface stating “they continue to work with the Archdiocese to find viable reuse options to preserve the building”. Currently a deal has been worked out to sell the building to a developer who intends to convert the space into a residency for the elderly.