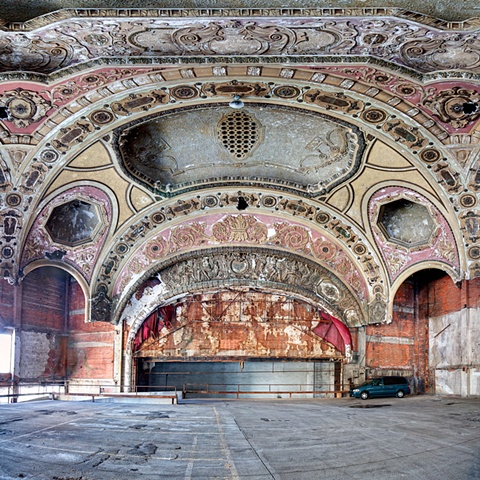 It was built upon the birthplace of the Ford automobile, so perhaps it’s fitting that Detroit’s Michigan Theater is now a parking lot – except that such a use seems to be such a terrible waste for such a stunning historic structure. Built in 1926 alongside the connected 13-story Michigan Building office tower, the 4,000-seat Michigan Theater has been left to decay, another casualty in Detroit’s long decline since its heyday as a car-manufacturing mecca.

The Michigan Theater was a theater in Detroit, Michigan, USA converted to a parking structure. It was built in August 1926 by the architectural firm of Rapp & Rapp for Detroit philanthropist and movie theater owner John H. Kunsky. Upon its completion the Michigan Theater could seat 4,050 patrons (although theatre developer John Kunsky boasted 4,500 seats). The theater ceased operations after its last closing in 1976 under the name of The Michigan Palace. After the theater closed, the office tenants threated to leave unless they received adequate parking. To keep the tenants, the owner gutted and converted the theater into a parking structure.