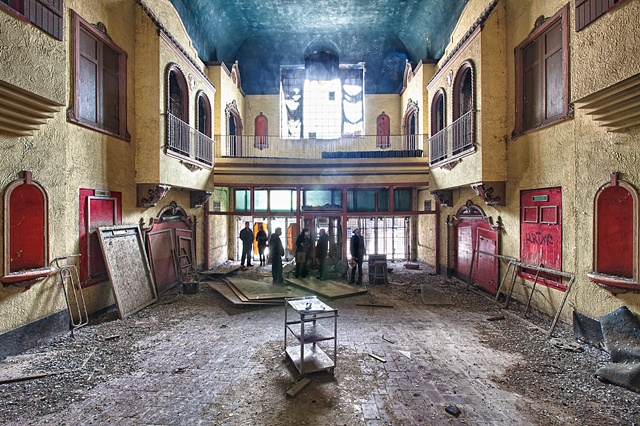 The Ramova Theater opened in 1929 on S. Halsted Street at 35th Street, as a “sister” to the Music Box Theater in Lake View, which was opened that same year. The architect of the Ramova Theater was Meyer O. Nathan.

Like the smaller Music Box Theater, which seats about half as many as the 1,500-seat Ramova Theater, both were designed in Atmospheric style inside, their auditoriums built to resemble Spanish-courtyards. On the deep blue ceiling of the Ramova Theater, “stars” glittered before each movie, and through the archways along the side walls were scenes of the Spanish countryside. Like the Music Box’s lobby, the blue sky with stars motif also continued into the ceiling. Faux-marble and gilded plasterwork were also in abundance, even more so than at the Music Box Theater.

Once the biggest theater in Bridgeport, the city-owned Ramova Theater is now a ghost in the neighborhood, closed for more than two decades.Tthe 82-year-old structure has likely been spared from the wrecking ball due to the city's ownership, but has done little redevelopment beyond that. But the community is hoping its old friend at Halsted and 35th streets can step into the limelight again. A group called Save the Ramova has been lobbying for years for the theater's preservation, even for a non-theater use and is working with the big thinkers at the Illinois Institute of Technology. But so far, no developer has stepped up with cash on the barrelhead to make something happen.