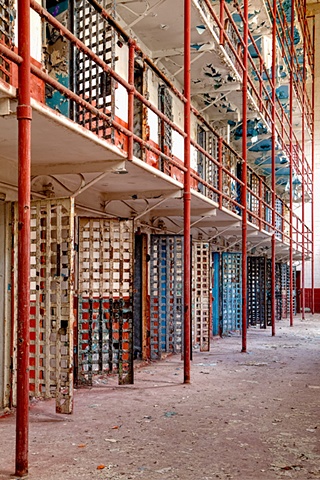 Down the Block
< previous

Tennessee State Prison is a former correctional center located near the downtown area of Nashville, Tennessee. Modeled after the Auburn Correctional Facility in Auburn, New York, the prison employed the Auburn System of confinement, which held that solitary confinement, hard labor, and a diminished sense of self could inspire personal discipline and respect for work, property, and other people. The fortress-like structure comprised 800 unheated and unventilated single-occupancy cells designed to instill fear into the hearts of their occupants. Overcrowded from the day it opened in 1898, the prison was the site of numerous riots and escape attempts. The facility finally closed in 1992 as a result of a class action lawsuit that prohibited the Tennessee Department of Correction from ever housing inmates there again.