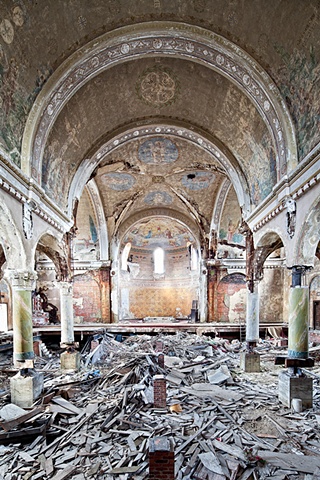 St. Joseph’s Byzantine Rite Catholic Church was completed in 1933 to serve part of Cleveland’s Carpatho-Rusyn population. The Rusyns are an Eastern Slavic ethnic group originally inhabiting the Carpathian Mountain region; primarily near the borders of modern day Hungary, Ukraine, Slovakia, and a small part of Poland.

Most of the Rusyns, sometimes called Ruthenians, practiced Orthodox Christianity until the 17th century when they became part of the Catholic Church. In the late 1800s, many Rusyns came to Cleveland, establishing several Byzantine Catholic churches in the area. St. Joseph’s is the second building to occupy the site, replacing a smaller structure first built in 1913. The current building was designed by Polish-American architect Joseph E. Fronczak. By the late 1970s, the congregation relocated to Brecksville, Ohio. They sold the church building to the Zion Baptist Church who used it for a time but ultimately abandoned the structure. As of 2011, the building is in a state of disrepair despite being a one of Cleveland’s 305 Designated Landmarks.

The brick-façade church is a simple Romanesque-style building; characterized by rounded archways, symmetrical bell towers, a central nave, and two flanking side aisles supported by columns with Corinthian-inspired capitals.