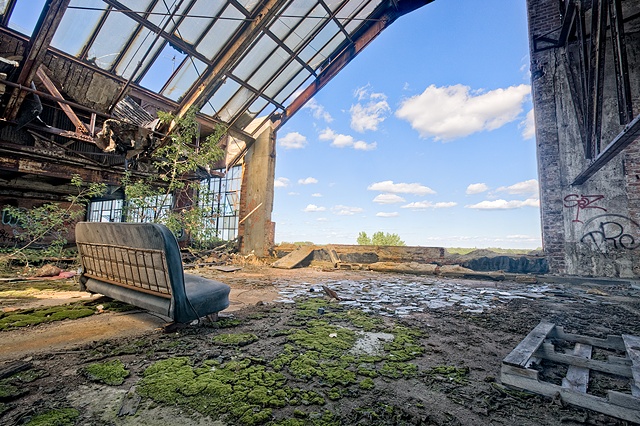 Room With a View
< previous next >

Packard was an American luxury automobile marquee built by the Packard Motor Car Company of Detroit, Michigan, and later by the Studebaker-Packard Corporation of South Bend, Indiana. The first Packard automobiles were produced in 1899 and the last in 1958. From this beginning, through and beyond the 1930s, Packard-built vehicles were perceived as very competitive in the class of high-priced luxury American automobiles. The company was commonly referred to as being one of the "Three P's" of American motordom royalty, along with Pierce-Arrow of Buffalo, New York and Peerless of Cleveland, Ohio.

The 3.5 million sq-ft Packard plant on East Grand Boulevard in Detroit covered over 35 acres and is the largest abandonment in Detroit. It was designed by Albert Kahn, and included the first use of reinforced concrete for industrial construction in Detroit. When opened in 1903, it was considered the most modern automobile manufacturing facility in the world, and its skilled craftsmen practiced over eighty trades.

Factories of this time were often downright dangerous, with poor lighting and ventilation and only the most rudimentary sanitary facilities. Most commonly made of wood, these structures were literal death traps, with many disastrous and deadly fires over the years. By using reinforced concrete, Albert Kahn changed all of this. The Packard name became synonymous with innovation yet again, as virtually all of the major auto companies followed Packard’s lead in their own subsequent construction, usually hiring Kahn. This dynamic new material also allowed ease of expansion not only horizontally but vertically as well, without disturbing existing buildings. This was a key benefit since expansion was the order of the day as the automotive industry exploded during the first half of the twentieth century.