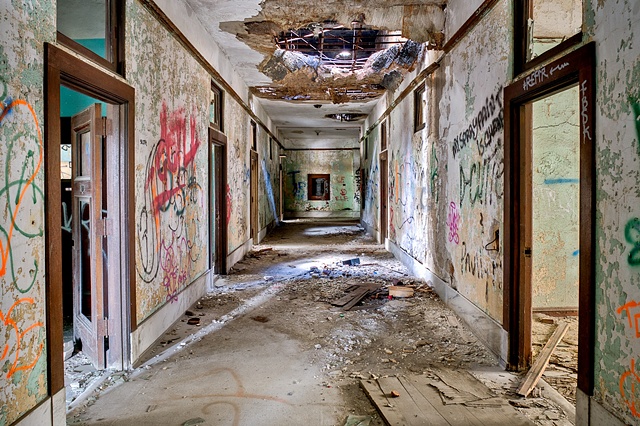 Opened in 1913, the building is of the Beaux-Arts Classical style of architecture, designed by the Warren & Wetmore and Reed and Stem firms who also designed New York City's Grand Central Terminal. The price tag for this 500,000-square-foot building was $15 million when it was built. The building is composed of two distinct parts: the train station itself and the 18-storey tower. Ideas as to what the tower was originally designed for include a hotel, offices for the rail company, or a combination of both. In reality, the tower was only used for office space by the Michigan Central Railroad and subsequent owners of the building. The interiors of at least the top floor were completed and served no function.

The main waiting room on the main floor was modeled after an ancient Roman bathhouse with walls of marble. The building also housed a large hall adorned with Doric columns and contained the ticket office and arcade shops. Beyond the arcade was the concourse, which had brick walls and a large copper skylight. From here, passengers would walk down a ramp to the departing train platforms, 11 tracks in all. The station was seeing a daily rush of people, but automobiles soon phased out trains to Chicago. The MCS was being used less and less because it was do dependent on passenger travel. The building seemed to have a temporary revival when Amtrak took over passenger travel in 1971, but the building was sold in 1984 to create a transportation center that never materialized. On Jan. 5, 1988, the last train departed and the doors closed.

Throughout the 1990s, the building remained wide open to trespass, and during that time, vandals stole items of value, such as brass fixtures, plaster and copper wiring. In the late 1990s, the building owner erected a razor wire fence and proposed an international trade processing center that never materialized. On April 7, 2009 the Detroit City Council passed a resolution requesting the emergency demolition of the Michigan Central Station using $3.6 million in federal economic stimulus money and then charging back owner Manuel Moroun. This once majestic landmark sits as a monument to Detroit's decline and decay.