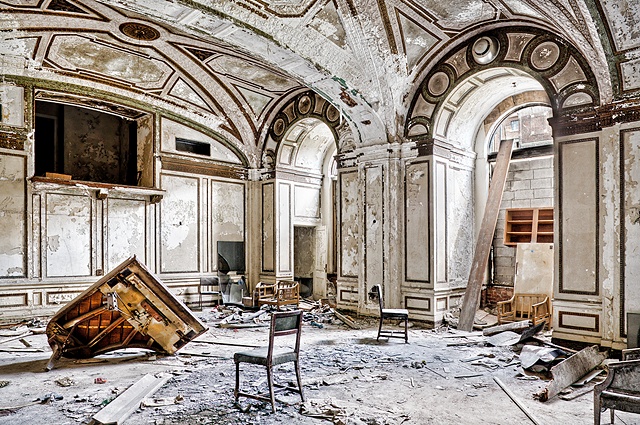 Lee Plaza Apartments The Lee Plaza is a 15-story steel and reinforced concrete structure built in 1928 with Mediterranean and Art Deco features. It has an orange glazed brick veneer and a steeply pitched green copper roof. The building has an “I” footprint and originally contained a lobby, dining rooms, lounges, ballroom and 220 luxury class apartments and rooms. Architect Charles Noble was given a budget of $1.1 million to design the building for Ralph T. Lee, a self-made real-estate entrepreneur and one of Detroit’s most prolific real estate operators in the 1910’s and 1920’s. Corrado Parducci designed the interior decoration of the public spaces, which accounted for a large portion of the original budget. Rich marbles, poly chromed plasterwork and ornamental ceilings could be found in the lobby, lounges, dining rooms and ballroom. Most notable was Peacock Alley, so called because of the use of blues, gold’s and greens in decorating the coffered ceiling of the barrel-vaulted walkway. The concept of the residential hotel was popular in the 1920’s and in growing demand among single men and women who appreciated the amenities and services provided. The Lee Plaza was one of several apartment hotels in Detroit at that time that provided the services of a luxury hotel as well as long-term residential features of an apartment building. Units ranged in size from one to four rooms. One and two-room apartments offered furnishings such as linens, silver and furniture. The three and four-room apartments could be furnished or unfurnished. Daily maid and radio service was also available with the convenience of a laundry and grocery in the building.