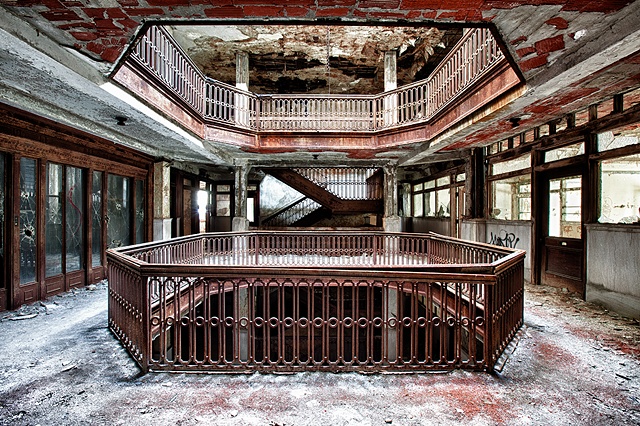 The Farwell Building opened on Capitol Park on March 8, 1915. Named for Jesse Farwell, a man who made his fortune in real estate and shipping among other fields, the building was built for mixed office space use and was home to attorneys, dentists and other professionals.

It was designed by Harrie W. Bonnah of Bonnah and Chaffee and also featured elaborate ironwork by Russel Wheel and Foundry of Detroit. The eight-story square shaped brick building was designed in the Chicago Style of architecture. The interior design was done entirely by Louis Comfort Tiffany, and the brass and marble elevators were unequaled in the city. The vaulted dome of the lobby was inlaid with thousands of tiny Tiffany glass pieces. Each piece of Tiffany glass, or as Tiffany named it, favrile, was individually cut and polished. The sheen of the ceiling resulted from a backing of gold leaf. After a fire in the mid-1970s, the main Tiffany chandelier was stolen. The Farwell, like so many office spaces in Detroit, struggled to hold onto tenants, and it closed in 1984. It is a fairly unknown landmark among Detroit's buildings but one of its most beautiful and architecturally significant. It was added to the State Register of Historic Sites on July 26, 1974, and to the National Register of Historic Places two years later on April 30, 1976.