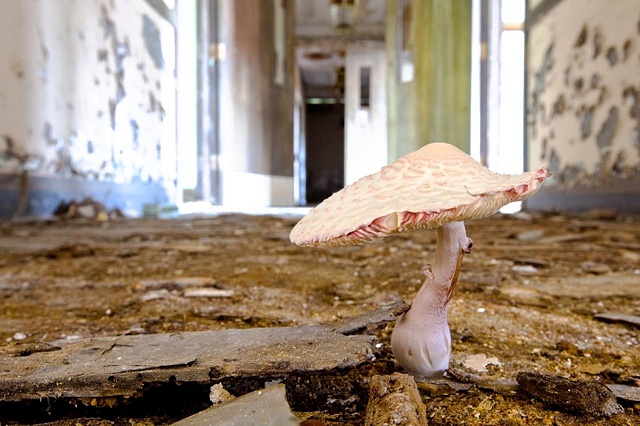 A Mushroom Grows in Gary
< previous next >

City Methodist Church, standing nine stories tall, is of the traditional English Gothic style. The church was built by Rev. William G. Seaman in 1926 at a cost of more than $1 million, with the United States Steel Corp. contributing more than half the project’s cost of $650,000 to complete the building. Elbert Gary, who gave his name to the city, donated a Skinner organ. In October 1926, the million-dollar Gothic cathedral at 6th and Washington Street was completed and dedicated. The sanctuary seated 950 worshippers, and in the church's heyday the congregation totaled nearly 3,000 members. Sadly, due to the shifting population of Northwest Indiana and social changes in the 1960s drastically affected the church, and by 1973 the congregation had dwindled to 300 members who could no longer afford the upkeep of the building. A committee held a meeting in October 1974 to determine the fate of the church. They decided to relocate and close the church as of January 3rd, 1975. The building was sold to Indiana University as a campus extension but nothing was done with it. Even in abandonment, this building is beautiful and a source of fascination for many