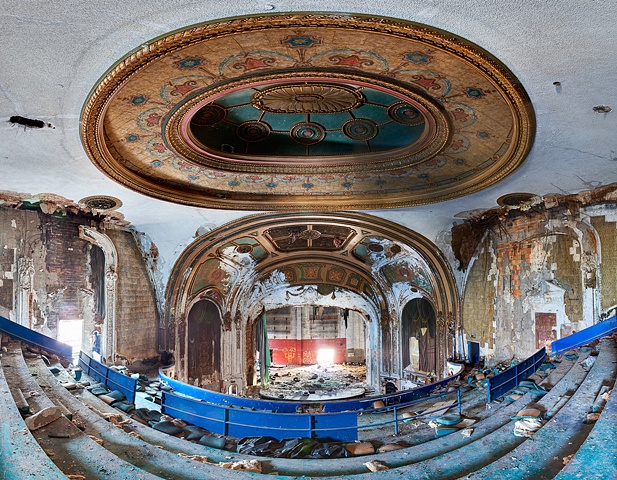 With the rise of movies and the city’s fortunes in the 1920s, Detroit got a number of palatial movie palaces. And as Detroit continued to sprawl and grow, enterprising theater owners decided to bring the movie palaces to the neighborhoods. The west side got the Grand Riviera. The southwest got the Hollywood. The north got the Uptown. And the east side got the Eastown. With 2,500 seats, it was comparable in size and elegance to most of the downtown theaters. The Eastown was built solely for “talking pictures,” when it opened. The complex was built for the Wisper & Wetsman movie chain, one of the largest independent operators of movie theaters in metro Detroit at the time. It was designed by architect V.J. Waier, who used a blend of classical styles for an interior that was mostly Baroque. It is his only known surviving work in the city.

The Eastown spent nearly four decades thrilling Detroiters as a movie house until it closed in 1967. Around this time, many old movie houses and ballrooms were being converted into rock venues. On May 29, 1969, the theater reopened with its first rock show. Among those who would play for $3 to $5 a ticket were the Who, the Kinks, Yes, Fleetwood Mac, Jefferson Airplane, Cream, and Rush. With the rock concerts also came drugs and violence. There were constant threats by the city to shut it down. In the mid-to- 1990s, the Eastown became an infamous site of raves attended by hundreds of people. In the early morning hours of Aug. 9, 2010, a fire destroyed the apartments in the complex, reducing half the building to nothing but rubble.